#Harambe: My Sorrow and Sense

He was a beautiful animal.  He had a reputable character.  Yet when faced with the probability of him causing harm to a young boy – no matter how the child ended up in the enclosure – Harambe’s life was ended.

It is a shame, I agree.   But his death isn’t sense less.

I say this from the perspective of being bit by an unknown dog just a few days ago.   It and a partner were happily minding their business and I, having never seen them before despite almost daily travel of this particular path, veered to the far side of the path as I approached them to give them plenty of space as I passed.   I took maybe four or five steps after passing them and just thought to myself that we had navigated each other successfully when I was surprised by a pair of jaws latching onto my back upper right thigh.   During my research into dog bite trauma and care, I found that most dog bites occur between known animals and their victims – that is family dogs.

Even those animals that we’ve spent thousands of years domesticating and deem our ‘best friend’ can be unpredictable and dangerous.

There is no way of knowing what would have happened, we can only estimate the probability of what could happen with Harambe and the child.    In this instance the probability that the boy was in danger was infinitely increased due to the age of the child – I’ve helped raised three boys, a four year old man cub is almost as unpredictable as a wild, albeit reputably gentle, gorilla.    The combination of the two was volatile and that is why Harambe lost his life.   Statistically speaking, the zoo personnel used common sense.

I am sorry that Harambe had to die, especially in the way his demise came about.  It wasn’t 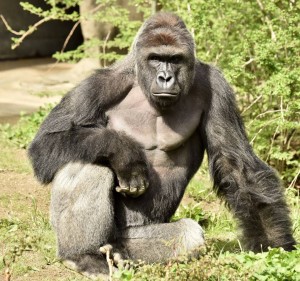 graceful, it wasn’t befitting of his life testimony, it wasn’t dignified as he apparently was.  I understand the anger expressed at his untimely death.

However, the probability that we would be having an entirely different conversation surrounding the death or severe injury of the boy is high if any other course of action were taken.   As I can readily attest, even our most domesticated friends are unpredictable at times, let alone a gorilla facing the stress of a stranger in its enclosure, an anxious audience, and a scared child.

Frankie earned her BA in History from CSU Chico. Her writing includes current events as well as self published fiction and a children's book she is publishing. She lives in northern California with one husband, two dogs, and three boys. Frankie is an avid cooker, reader, hiker, and napper. END_OF_DOCUMENT_TOKEN_TO_BE_REPLACED
This entry was posted on Wednesday, June 1st, 2016 at 00:01 and tagged with cincinnati zoo, criticism of cincinnati zoo, dog bites, gorilla, gorilla and boy, Harambe and posted in Uncategorized. You can follow any responses to this entry through the RSS 2.0 feed.
« Beginning Notes: For My Niece on Her Graduation
Promises »